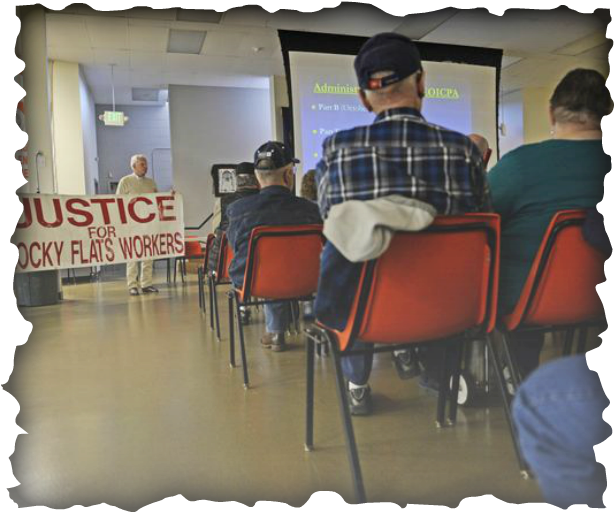 Thousands of former workers in the Rocky Flats Nuclear Plant were detrimentally affected by  powerful radiation while being exposed to harmful, cancer-causing chemicals. The former workers of Rocky Flats and their families ultimately suffered all of the consequences, including paying for hospital and medical bills related to radiation caused by plutonium and beryllium. The 2000 Act, which should have been passed in 1952 at the latest, may have been a new call for justice for these affected people, but instead proved otherwise. More than 4,000 Rocky Flats claims for medical compensation have been denied by the 2000 law. This is because the law itself has many specific government requirements that make the process to get approved and compensated almost an impossible feat (Udall, 2014).

Countless former Rocky Flats workers have been outraged by the 2000 Act because the compensation program fails to approve the claims of numerous workers due to its complicated government standards and requirements. A complicated and extensive process, many affected workers feel that NIOSH and DOL are purposely making the claiming process a difficult one. Claims that take up to three years inevitably end up being denied, and those waiting to be compensated ultimately end up dying before receiving any form of compensation. In the end, those who were affected by the unique hazards of Rocky Flats end up not get the justice they deserve (DOL, 2014).

Government Standards: Are you Eligible or Not?

Some strict, government requirements and standards in order to be approved included:

1. “Proving personal histories of radiation doses of other forms of poisoning from exposure to heavy metals and the dangerous chemicals “


2. Only 22 types of cancer specified by the government are covered under the 2000 law

Qualifying cancers included “ leukemia, lymphomas, and cancers of the lung, brain, bones, breast, ovary, esophagus, stomach, colon, small intestine, urinary bladder, renal system, bile ducts, gall bladder, salivary gland, pharynx, thyroid, pancreas and liver.” Many other cancers can be caused by radiation, including prostate cancer, which is excluded. Moreover, if an affected worker’s cancer is not on the list, then he or she is not covered (CDC, 2014).

Danny Adkins, a former metallurgical operator of Rocky Flats, developed pancreatic cancer in 2001 and filed a medical claim under the 2000 act. His claim was denied because the government determined that “there was only a 46 percent probability his cancer was a work-related illness- under the 50 percent threshold required”. Adkins later died in 2003 without being compensated. (Draper, 2014).

“The dates they’re picking leave out a lot of people...it was still nasty after 1983, after a while, they told us to stop drinking the water or washing our hands. Friends I worked with have had brain tumors and lots of other problems. They could sure use some help.”- Stephanie Gray, former worker at Rocky Flats from 1988 to 1995, who did not develop cancer but needed surgery to remove a brain cyst caused by radiation (Draper, 2014).

Today: Justice or not?

Nevertheless, these affected people who have now developed cancer and other forms of deadly disease just yearn for the compensation and justice they know they deserve from the government. Former workers have protested and formed panels to monitor programs, petitions and town meeting regarding the health claims and rulings. Organizations in helping those who want to claim, such as the EECAP have been formed (Draper, 2014).

Updates as of February 2014:
“Special Exposure Cohort”: Effective Jan. 11, affected people are able to gain compensation under the SEC of $150,000 per case and coverage of medical expense . Workers no longer need to prove personal histories of radiation, and the new statuses promises faster processing of claims. Currently, 302 previously denied claims are being reviewed. However, there are still numerous efforts that need to be made by NIOSH and DOL to grant the compensation the affected workers deserve (Udall, 2014).