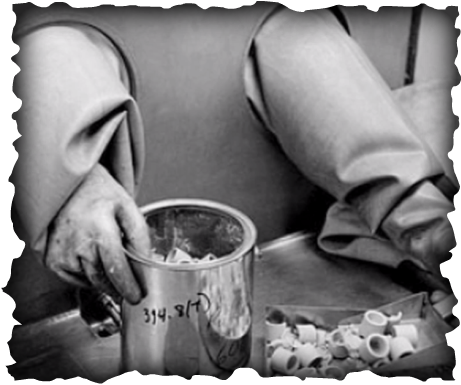 The Energy Employees Occupational Illness Compensation Program (EEOICP) inevitably had its troubles from the beginning.  Established on July 31, 2001, the program was initially split into two parts. The Department of Labor (DOL) was in charge of part B of the act. Part B recognized workers exposed with radiation, beryllium, and silica. Department of Energy (DOE) was responsible for Part D, claims responsible for workers exposed to toxic substances (Bison, 2011). Bill Richardson, former Secretary of State who publicly spoke out during the beginning of the compensation act, ensured Rocky Flat Workers that "the government was on their side". However, four years after the compensation act was passed, mismanagement within the actual program began to show. On October 2004, Congress passed an act and gave the Department of Labor complete control of the Program. However, from the start, DOL gave compensation claims to the National Institute for Occupational Safety and Health (NIOSH) and it was up to NIOSH to determine if the cases were affected by radiation. The outcomes of these compensation claims were under the control and hands of NIOSH, and this is where one of the main faults of the compensation act occurs (Program, 2004).

The Department of Energy's Downfall 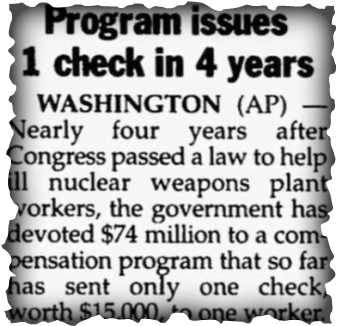 The Associated Press wrote articles exposing the faults within the compensation program during its first few years after being passed. Here we see that the government had given $74 Million to compensate workers and only $15,000 was given to one worker .This indicated that after four years and hundreds of claims that were filed from 2000-2004, only one claim was approved. It was sure that the Senate was to immediately question the Energy Departments and funding. This was just foreshadowing the further injustice the compensation program has done to the forgotten workers of Rock Flats (Bison, 2004).

National Institute for Occupational Safety and Health: Whose Side Are They Really On?

NIOSH MIssion Statement: "The National Institute for Occupational Safety and Health (NIOSH) is the U.S. federal agency that conducts research and makes recommendations to prevent worker injury and illness....NIOSH research is key to these efforts and provides practical solutions to identified problems. The Institute’s work in this area protects the safety and health of the nation's 155 million workers." http://www.cdc.gov/niosh/about.html

With claims under the hands of NIOSH, a U.S. federal research agency that devotes it works on "providing practical solutions vital and reducing risks of injury and death", it may seem like the compensation act justifiably granted the Rocky Flats workers the compensation they deserve. However, NIOSH is responsible for determining whether or not the claims were affected by radiation, and therefore the reason for the lack of claims being approved. They determine whether a claim gets approved through a process called dose reconstruction, which inevitably determines a worker's life or death (National).

NIOSH uses propaganda and persuasive language in informational videos to make it seem like they are on the side of the workers.

"We [NIOSH] accept the scientific method to estimate the radiation a person is exposed to. [We] calculate that amount of dose to the organ that is affected. [We] use physics to study radiation, chemistry for elements and how they are exposed to the environment and how they interact with body tissues, and biology to study the development of cancer and how radiation affects tissues in the body."