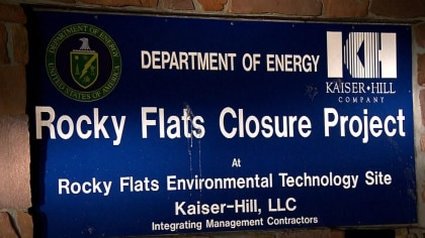 http://denver.cbslocal.com/2017/05/02/rocky-flats-settlement/
The Rocky Flats lawsuit against the Dow Chemical and Rockwell International is one of the longest running cases in the U.S. This legal fight began when the residents in Rocky Flats accused the two companies of corrupting their properties with plutonium and other chemicals released from the power plant. This lawsuit, which involved 15,000 homeowners, was first filed in 1990. After a 27 year long legal battle the lawsuit has finally reached to an agreement with a $375 million settlement (1).
According to Rachelle Schikorra, a representative for Dow Chemical, the company is responsible for a total of $131.25 million from the settlement share. Rockwell, on the other hand is accountable for $243.75 million (2).
According to court filings, all those who possess property near the affected sites as of June 7, 1989 will be eligible to share the settlement. Any owner who bought land after that date or sold it before that date will not be eligible to receive any compensation.
Even though the lawsuit is settled many of the property owners involved in it has passed away. Kathleen Geneoff was one of the condo owners that lived in the affected areas that qualify to share the settlement. She is hoping to receive as much as $12,000 as a part of the share. “I never expected to live long enough to see settlement” states Geneoff. Despite the long duration of time it took to reach a settlement, the homeowners and the public is pleased to see justice prevail at the end. 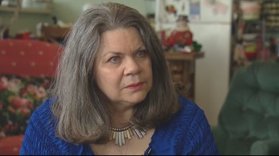 Kathy Genoff: http://denver.cbslocal.com/2017/05/02/rocky-flats-settlement/
According to the lead attorney for the      plaintiffs, Merill Davidoff, the compensation amount for    each individual vary according to their individual property  values at the time it was filed in June 1989. He stated  that most of these individuals are likely to receive around  $20,000.
Unfortunately, the settlement does not include  compensation for any of the health issues that resulted  from the pollution since there is no clear evidence that links the diseases to the pollutants. As for the time being they are satisfied with the fact that the government finally is ready to acknowledge their effects on the population in the cited area. Rocky Flats residents hope that the negative health effects caused by this pollution would also be acknowledged in the future.

The proceedings following the lawsuit. 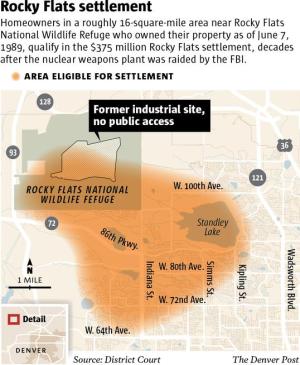 http://extras.mnginteractive.com/live/media/site36/2016/0519/20160519__CD0520BROOMFIELD-01~p1_300.jpg
​Following the lawsuit that was filed in 1990, a 375$ million settlement was eventually reached on May 2016, ending a long, tumultuous, 26 year-old battle for environmental and public health justice. Although it is expected that most of the settlement monies won't be paid out until June 1st of 2017, the due date of filing a claim, lawyers are already seeking out homeowners that might have held property around the area in June 7, 1989. Up to 15,000 homeowners may be compensated for the damage and devaluing of property that Rockwell International Corp. and Dow Chemical Co. have inflicted on the areas surrounding the Rocky Flats Plant (5).

According to the settlement, "all class members includes all persons and entities that owned an interest in real property within the Property Class area on June 7, 1989" (6). Anyone who is an heir or successor the the properties may also file a claim to retrieve some of the compensation money. 40% of the settlement money will go towards attorney's fees and will cover other extra costs that went towards winning their case. Up to this date, more than 10,000 homeowners have filed claims in this $375 million class-act lawsuit against the facility's operators.

Although the monetary compensation provided a modest sense of justice towards property owners to the area, there are still repercussions that will continue to disturb the residents of Jefferson county. The lawsuit victory was a legal win, not a public health triumph. Inhalation or penetration of skin are the top exposure routes for plutonium, a radioactive element that has been known to cause radiation sickness, cancer, and genetic damage (7). ​